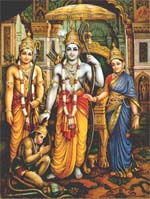 When Jambvant reminded Hanuman about his extraordinary latent powers, Hanuman became ready to leap across the mighty ocean. Hanuman climbed the nearby mountain on the shore and then crossed the ocean in one giant leap. While flying over the ocean, he was tested by Mainaak and Surasa for his intelligence and power. Needlessly to say, Hanuman came out with flying colors. True to any devotee, for Hanuman, there was no rest without completing his master's work.

Hanuman landed and saw the prosperity of Lanka. Search for Sita brought him to Vibhishan's house. There, he got knowledge about Sita's whereabouts and straight headed for beautiful Ashoka-Vatika (garden). Hanuman saw Sita being tormented by an amorous Ravana, who was trying to force her to marry him.

Hanuman then met Sita while she was lamenting about her fate, and gave her Ram's ring and message. He sang praises of Ram to bolster her moral up and told her that Ram was on his way to rescue her. Sita was in doubt whether the monkey army would win over mighty demons of Lanka. In response to Sita's doubt, Hanuman showed his grand form, looking at which Sita was relieved.

Hungry Hanuman could not resist temptation of eating juicy fruits on surrounding trees. This caused trouble and in a display of his heroism, Hanumana killed many demons including the son of Ravana - Akshay kumar. Later, when Meghanada used his ultimate weapon - Brahamstra, Hanuman decided to respect it and ended up deliberately caught and taken to Ravana's palace.

Hanuman met Ravana in his great court, and taunted him, asking him to restore Sita to Ram lest he should face Ram's wrath. A furious Ravana lost his temper and ordered to kill this strange and eloquent monkey. However, with the intervention of Vibhishana, Ravana agreed to teach Hanumana a lesson in a different way. He called for his guards to set Hanuman's tail on fire. Hanuman, unhurt by the flames, jumped from one to another place in rapid succession with his tail ablaze and burnt the city to cinders leaving the place of Vibhishana untouched. He then jumped into the ocean and extinguished the fire on his tail and returned to see Sita for final salutation. Sita gave Hanumana one of her jewels as her sign, to pass on to Ram.

Hanuman then returned to Ram, who was overjoyed to see Sita's jewel. On hearing Hanuman's account, Ram decided to gather his forces and attack Lanka.

Here, in Lanka people were taken aback by the velour of Hanumana and wondered about the might and power of that man whose mere envoy single handedly caused havoc in Lanka. Mandodari, queen of Ravana tried to persuade him that he should return Sita. His council of ministry including Vibhishana advised that way. Ravana got angry with this advise and kicked Vibhishana out of Lanka.

Vibhishana, knowing Ram's compassion and mercy headed to take refuge unto Ram's lotus feet. Sri Ram welcomed him with open arms and marked a Tilak in his forehead signifying him as a future King of Lanka.

Vibhishan then advised Ram to pray to Sea God for finding a solution to cross the ocean and reach Lanka with monkey warriors. Ram observed fast for three day and prayed to Sea but in vain. At last, Ram decided to dry the ocean with his fire-arrow when ocean god appeared before Ram. Ocean deity gave ceremonial welcome to Ram and told him that Nala and Nil are two engineers in Ram's army blessed with extraordinary powers so as to make a bridge across the ocean. Now, it was just a matter of time before the whole army reaches Lanka for the final battle.