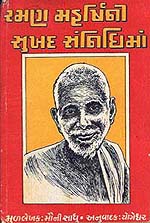 Fascinated by India’s centuries old spiritual heritage, Indian scriptures and legacy of realized saints and sages, great number of foreign travelers visited India in the past. Needlessly to say that all drew inspiration from the life and works of illumined souls. Raman Maharshi was one such luminous soul who guided many spiritual aspirants and inspired seekers of truth.

Raman Maharshi was dwelling at his ashram Ramanasharam during those days when the author of this book, ‘Mauni Sadhu’(M. Sudouski) visited him. He stayed in his ashram for a long period of time. His inquisitiveness was satisfied by Raman Maharshi. When he returned back to his country, he wrote his interaction in the form of a book entitled ‘In days of Great Peace’ in English.

Sudowski was born in Warsaw on 1 September 1898 of mixed Polish and East German (Prussian) parentage. After World War II, he moved to France and changed his name to Michael Sadau. He died just before Christmas in 1971. Mouni was a Catholic. He changed his name to Mouni Sadhu after staying with Ramana Maharshi in 1949.

Through a narrative that is both simple and profound the author takes us on his journey to the quiet hermitage of the renowned sage of Arunachala in South India. Basking in the radiance of the 'Great Rishi', his mind turns inward, following the path of Self-enquiry of 'Who Am I'? He describes with perceptive insight and emotion, how in the gracious presence of the Master, thoughts are stilled and one rests calmly in the thought free, egoless state, which he calls 'Samadhi'. Before his final farewell of the holy Sage, he establishes the link of love that binds him to the Guru in an embrace that leads inevitably to final emancipation.

For the benefit of Gujarati people, Shri Yogeshwarji translated his book 'In days of great peace' in Gujarati. Devotees and Admirers of Raman Maharshi would love to read this book.